Check Out My Award Winning Books

Be Careful Who You Trust

Children Should Listen To Their Parents

It’s Fun To Be A Friend 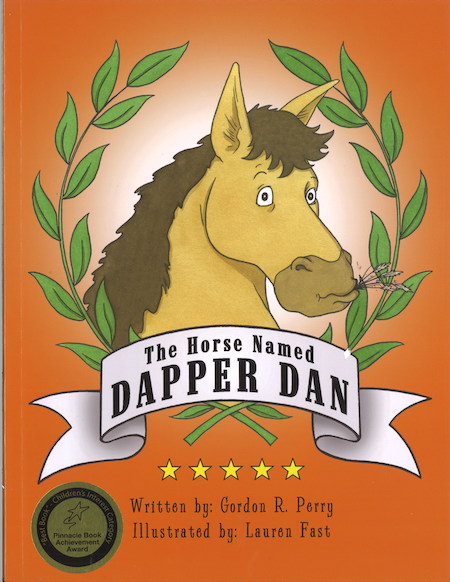 Courage and Commitment Can Make You a Winner

Please inquire about our School and Library Reading Program

Gordon Perry always enjoyed reading storybooks and telling stories to his own four children when they were young, and began writing down many of the “tall tales” which they enjoyed most. Each book is based on a Short Rhyming Story, and carries a “Value Message” or lesson to be learned and applied for a better life.

Many years later, after retiring from a career in construction, and with a lot of encouragement from friends and family, he decided to go ahead and have these illustrated and published. The first one chosen was The Frog And The Prince, released in the summer of 2012, followed by The Funny Farm in the summer of 2013. They were both winners of the NABE (North American Bookdealers Exchange) BEST BOOK Award, in the Children’s Interest Category, for the spring and fall 2013 Competitions, respectively.

His Third title, released in the fall of 2014, is The Dog And The Hen. It has an anti-bullying Theme and is a story of a little dog who is being picked on and bullied by the bigger dogs. Then, along comes a little hen who becomes his best friend. If they can look beyond the physique, and become friends, maybe we can too!

His fourth title, Dreams, released in the Fall of 2015, is a true travel log of a fun business trip he took with his 4-year-old son. It was a great bonding experience for both father and son. It teaches Parents that “Someone is Always there, Watching what you do…” So make your Actions Worthy, for those who Copy you”.

The Fifth Title, Just Released in Sept 2016, “The Horse Named Dapper Dan”, is a story of a Race Horse who has never won a race before, but one day makes up his mind to “Never give in” and he succeeds in winning the race.

Gordon and his wife live in central Alberta and are the proud grandparents to 11 grandchildren.

I really like The Frog And The Prince, especially the surprise ending where it turns out that the Frog is telling the story!! I think it puts a unique twist to the story. The Pictures are extremely well done. The Title is also intriguing, and creates “mystery” as to what the story is really all about. It is a wonderful story!!

The Frog And Prince is such a fun read! My babies are 5 months old and they already love looking at the big letters and pictures in the book. When its time for bed I like to send them off to dreamland with the poetic verse of the Frog and the Prince

You wouldn’t believe this fantastic book that we read last night. We have read it several times already because my kids love it so much. It’s called “The Frog and the Prince”. It is such a cleaver book and beautifully illustrated too. Thank you so much. You are a very talented author.